Google has developed a TV system merges broadcast TV and Internet TV into a combined system that allows users to organize and manage their home media using traditional TV remote controls or smartphones (such as Android phones with a TV app). The initial Google TV system combines satellite TV (Dish Network) with Internet TV (OTT).
The system was developed through the cooperation and combined efforts of Google, Intel, Sony and Logitech [1]. Google TV (GTV) is based on the Android open source (free to use) software. This should allow TV Widgets (such as social network widgets) to be easily adapted from Android mobile apps. Viewers can connect to Google TV either using standard television through Google TV set top box (from Logitech) is used or to connected TVs (such as produced by Sony).
This figure shows the basic structure of the Google TV system and how the Google TV system combines Broadcast TV (Dish TV) with Internet Video (YouTube, Netflix, Amazon). The Tv is connected through a Google TV set top box (GTB) which has the open source Android operating system. This user has downloaded a social media TV widget (to communicate with Friends). A common user interface (UI) allows the viewer to see and select either broadcast TV and Internet media through a common navigation system. This system can be controlled by a traditional TV remote controls or by a TV remote control application that is located on an Android smartphone. Google is at the center of all of this with a Google media store which can provide video, ads, and software applications on a shared revenue basis. 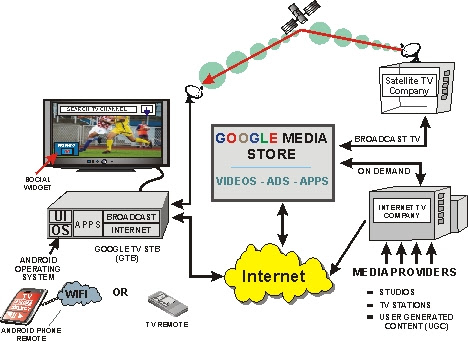 Posted by IPTVMagazine at 7:23 AM

IP Television Magazine explains how and why people and companies are using IP television and Internet television services.